Throughout the architecture history, we have been concerning the facade treatment for a much pleasant visual impact to the public. But what pushes its own boundary now, is how do we make the facade more than just a static vertical architectural element. What if a facade functions more than just an envelope of a building? What if a facade responds to climate, technology, sunlight, or even natural element such as wind? What if a facade can constantly react to the surrounding and forms a pattern of movement by itself? What if, a “dynamic facade” proposal that could respond to the environment and minimize the energy consumption? The façade is a part of the urban fabric that builds up the city. It is a crucial component, especially considering public or commercial buildings or even offices on important avenues and streets. The visual impact of any structure for a layman is mostly associated with the structures greatness, its aesthetics, its uniqueness, and how captivating it is apart from the amount invested in it by the companies. To top it up, people are becoming increasingly aware of their surrounding environment and prefer ideas and designs that are sustainable and environment friendly.
With the use of material and technology in a given set of boundaries and conditions, the contemporary architecture surfaces are classified into “dynamic” and “static”. The building envelope acts like a skin, an intermediate between the interior and the exterior. This skin has evolved over time, with the help of the engineered solutions; the purpose of dynamic facades is to assist in the progress of Sustainable and Responsive architecture. The dynamic facades act as filters between the indoors and the outdoors, facilitating the users providing appropriate shade, sunlight, ventilation and a visual union with the world in motion outside. It is not a new idea, but it is only recently that architects have started utilizing this technology in their structures and designs.
“Through fully integrated design strategies, today’s facade can provide responsive and performative envelopes that both contextually and conceptually react to their local surroundings, whilst simultaneously determining interior conditions,” said Ben Van Berkel, the co-founder of UNStudio (2014). That is undeniable truth that facade in today’s architecture is getting just as complex as the building structure. There are already many dynamic facade treatment examples in this industry that have proven its workability.
The love and fascination with technology and experimentation has become a prevalent and extensive part in the architectural discourse in these times. This has resulted in endless possibilities in the designs and usage of dynamic and kinetic architecture. The environment is the key factor that impacts the design of the façades; the amount of layering and the material choice, all is dependent on these external forces. In order to let you all further understand the overall idea about dynamic facade, these are several types of dynamic facade we could put in category. 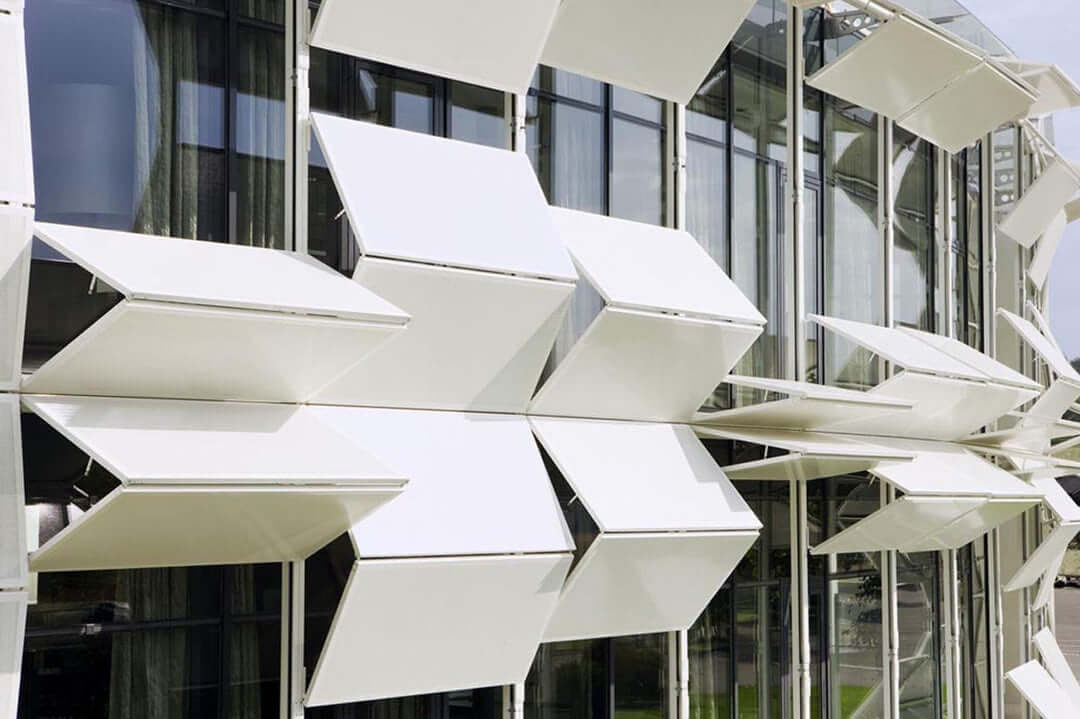 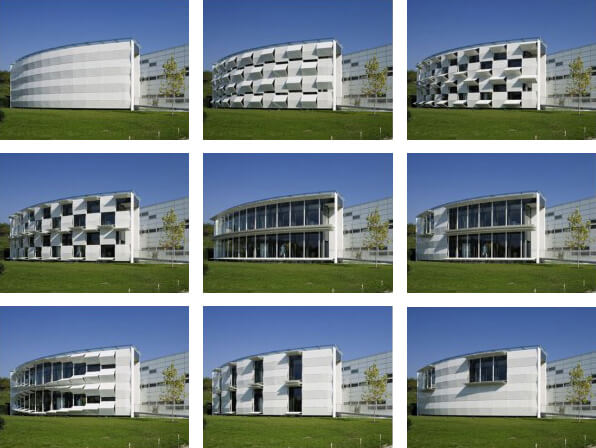 User-Control Dynamic Facade First type is the “user-control dynamic facade”, the Kiefer Technic Showroom by Ernst Gieselbrecht + Partner, a built project located in Steiermark, Austria (2007). “The way the dynamic facade works is through electronic controls within the building that can individually control each of the 54 motors within the facade. It is a simple technology which does not include any type of responsive system and responds only to the use input from the building occupants.” The facade itself is functioning as a shading device but given the users to control the angle of the panel, and amount of light transmitted into the interior space.


Occupants can adjust the light and temperature in the room by controlling any or all of the 112 metal tiles that grace the exterior of the showroom by means of 56 engines. The motion of the tiles is quiet. 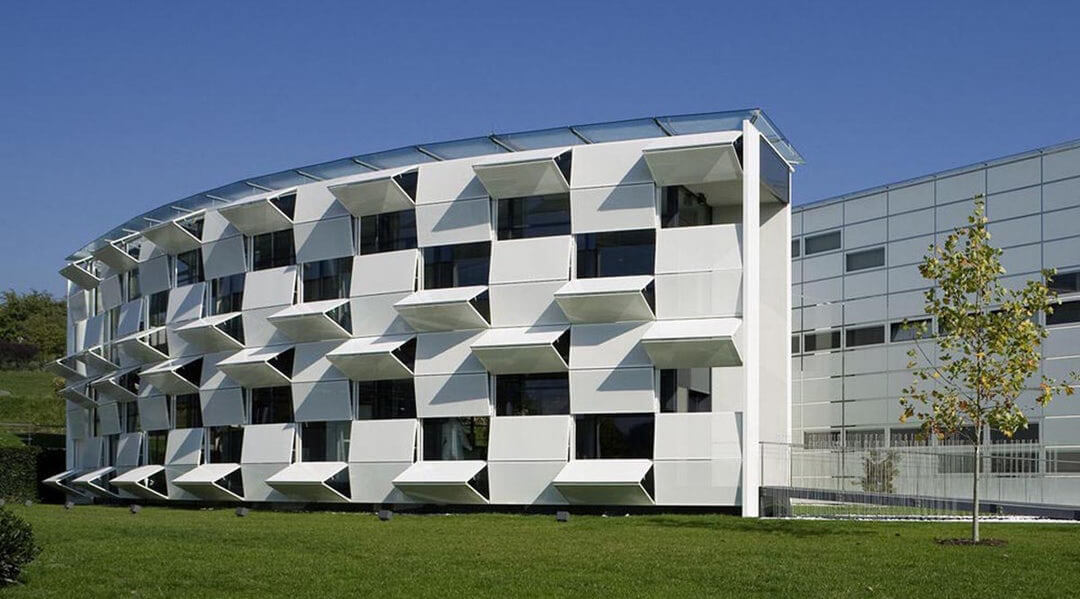 Light Projection Dynamic Facade The second type of dynamic facade lighting projection based. There is a built project in Cheonan, Korea which fits in this category. Galleria Centercity by UNStudio (2010). UNStudio has set up a good example for us that utilize the light back projection, we are able to tell the zones of different resolution as well as detail. “The strategy for the building enclosure consists of creating an optical illusion. The facades feature two layers of customized aluminium extrusion profiles on top of a back layer of composite aluminium cladding. The vertical profiles of the top layer are straight; but those of the back layer are angled. This results in a wave-like appearance, which changes with the viewpoint of the spectator (Moire effect).” said UNStudio. 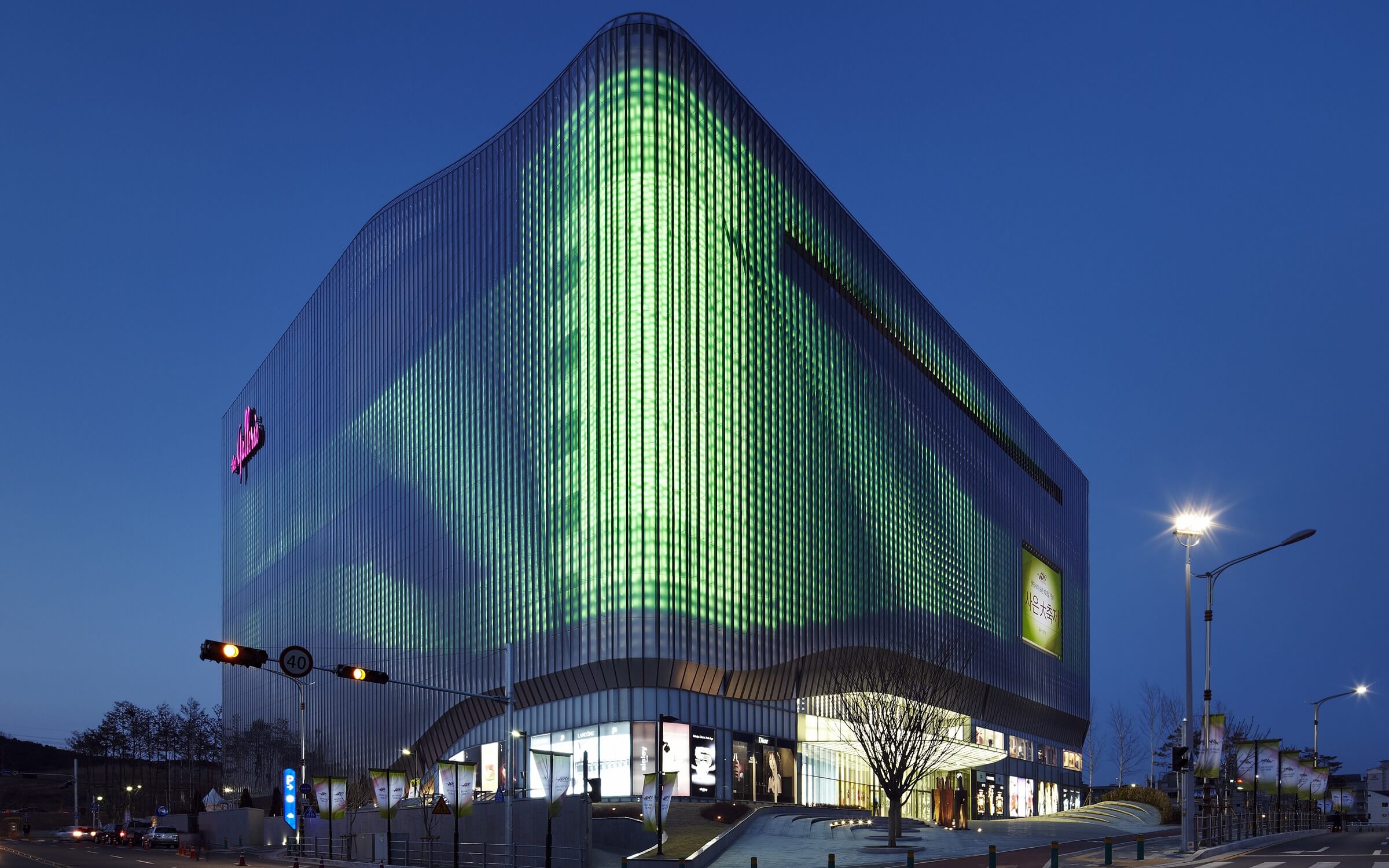 Light Control Dynamic Facade Jean Nouvel’s L’Institut du Monde Arabe (Paris, France) was built in 1987 and is one of the oldest examples that incorporate the idea of Dynamic Façades. The South façade is inspired from the Arab geometry of ‘Mashrabiya’. Its 27,000 diaphragms, organized in 113 panels, operate on the principle of a camera lens and are controlled via central computer to moderate light levels on the south façade. The lens’ polygonal openings echo the said Arabian geometries. The structure is frozen now, and doesn’t really work and has become a question mark in the use of kinetic strategies in architecture. Again inspired from the ‘Mashrabiya’ is The Abu Dhabi Investment Council Headquarters, Al-Bahr Towers, designed by Aedas architects and Arup engineers. It consists of a shading system of PTFE clad Mashrabiyas. On Arup’s Website they state that, ‘the system is predicted to reduce the solar energy entering the building by 20% and is one of a number of innovative measures to improve environmental performance and limit energy use.’ They also claim that the design has resulted in 40% saving in carbon emissions. This restores our faith in the use of dynamic facades in our designs. 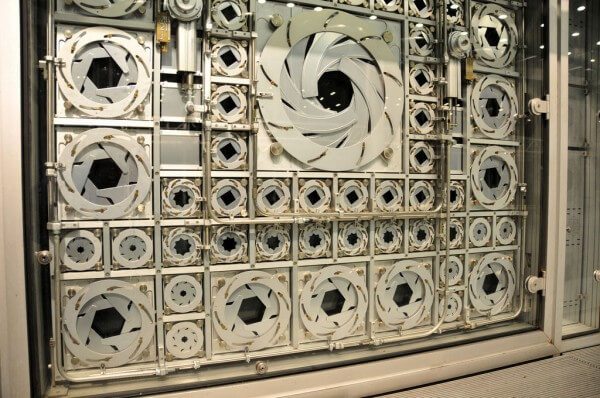 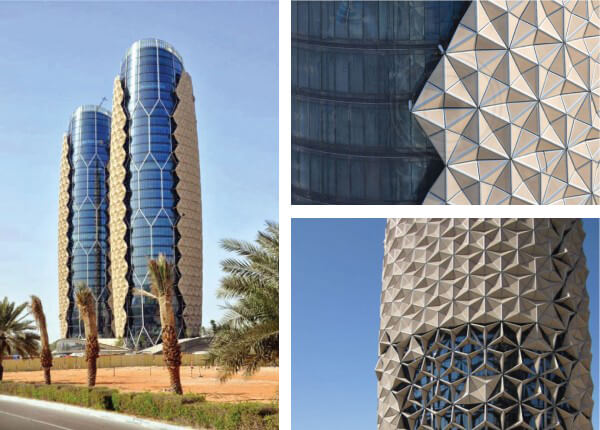 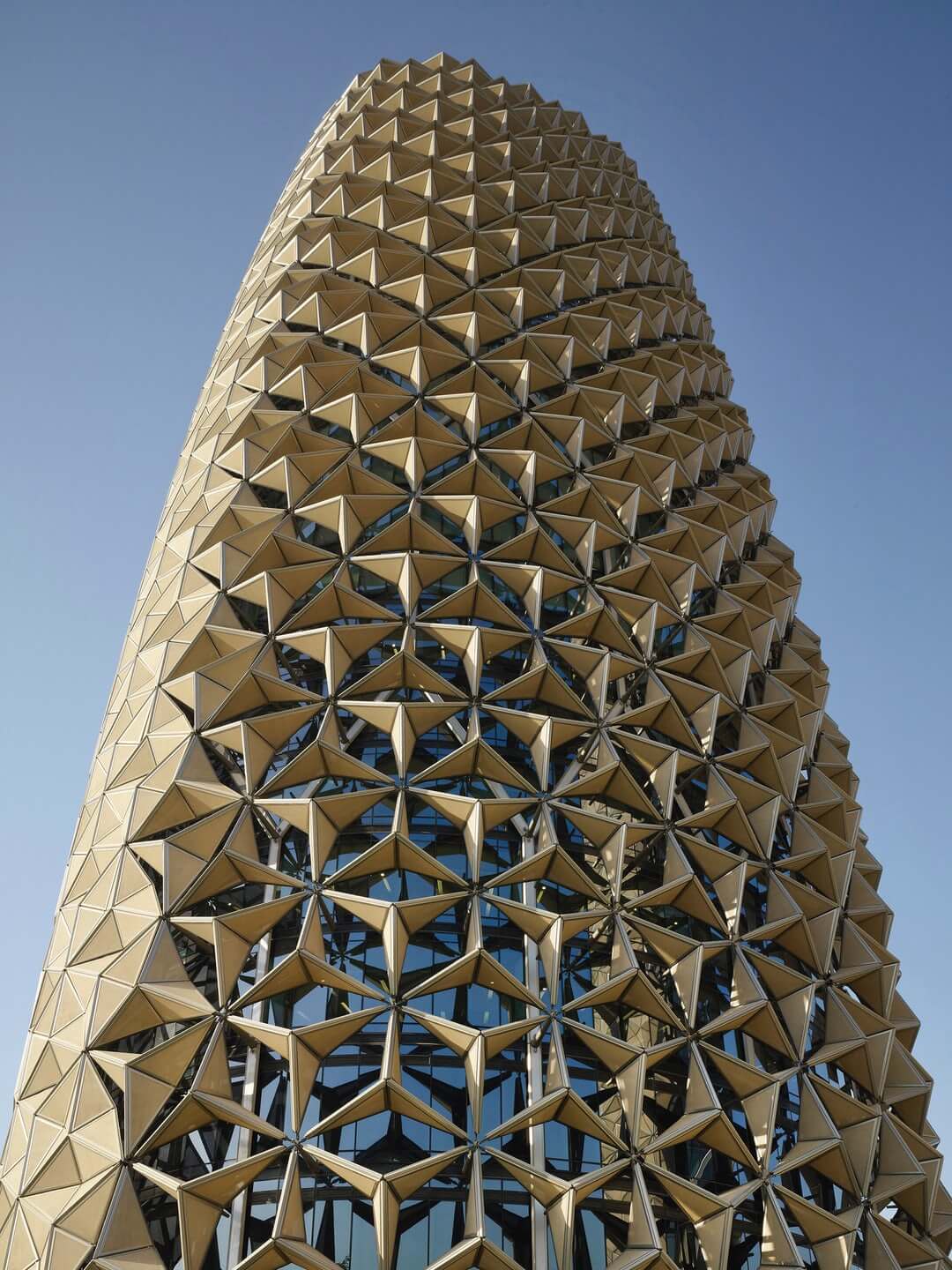 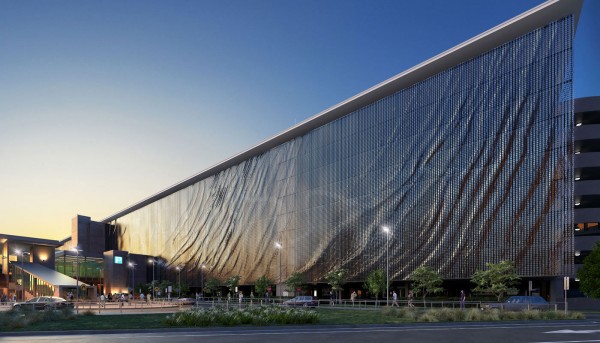 Wind Responsive Dynamic Facade Besides the three types of dynamic facade I have mentioned earlier, the “wind responsive dynamic facade” comes in as our third type of dynamic facade in the category. Wind as a natural element itself is strong enough to provide a dynamic pattern of motion without wasting any energy. Brisbane Domestic Terminal Carpark in Australia (2011) has installed 250,000 aluminium plates to create this wind-powered facade. “Viewed from the exterior, the car park’s entire eastern side will appear to ripple fluidly as the wind activates 250,000 suspended aluminium panels. As it responds to the ever-changing patterns of the wind, the façade will create a direct interface between the built and natural environments,” said UAP Workshop (2011). The facade itself constantly stays in moving motion as the wind blows. 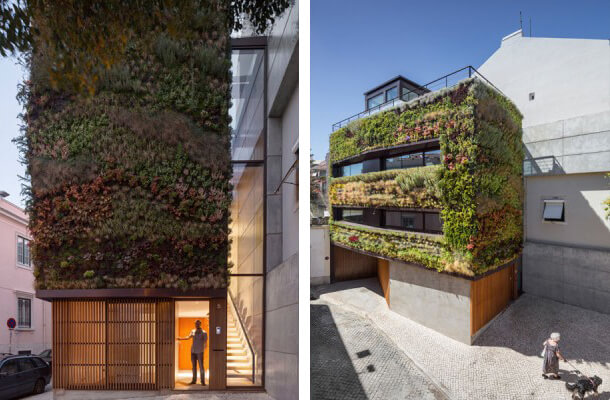 Seasonal Green Dynamic Facade Last but not least, a facade which integrating the greeneries to make the facade responsive to the 4 seasons is also been categorized as one of the dynamic facade. House in Travessa Do Patrocinio in Lisbon, Portugal (2012) shows a facade can be dynamic without high-technology system. Luis Rebelo de Andrade has dressed-up the 4 story height facade with vegetation, creating a vertical garden, filled with around 4500 plants from 25 different Iberian and Mediterranean varieties which occupies 100 square meters. “Therefore, this project is in fact a mini lung and an example of sustainability for the city of Lisbon, keeping the principles of a living typical habitat and a relationship with the outside, assuming a revitalizing urban role.” Although as much as interesting the facade could be, eventually it comes down to the costing question. “To be able to maintain such conditions. the energy need to operare these complex devices translates into ever higher running costs due to the ascendant trend in the price of energy.” said Sinziana Rasca.
One does think, using kinetic dynamic façades we are saving manual labor of getting up and closing window shades or opening them, but is it worth it? Aesthetically speaking, the dynamic facades are inviting and interesting for the individuals walking by, the people, the users. They might even add some life to the built urban environment, but in the long run are they actually as energy efficient as promised? Are they sustainable enough? The amount of cost spent on just the manufacture and assembly of the systems, is there actually a profit in terms of energy consumed? Do they break even? The debates are there, but with the developing technology we need to agree the cost have gone down over the past year. But then I am forced to question the cost and energy that goes into maintaining these complex structures. The mind is boggled, but this still doesn’t stop us architects from designing innovative buildings and experimenting. 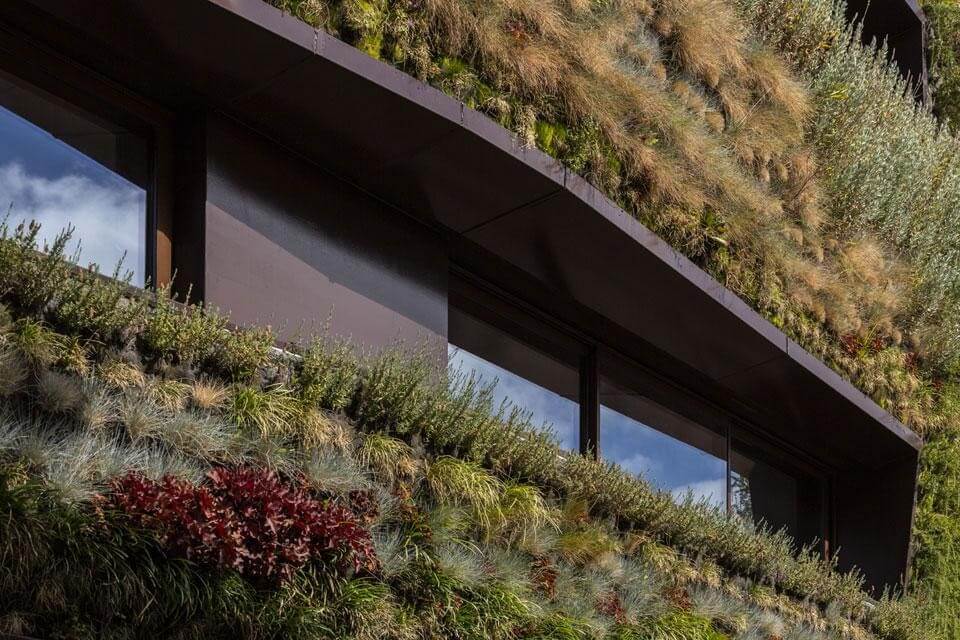