NEUROSCIENCE: THE NEXT COMPETITIVE ADVANTAGE
No matter how interested you are in this article, you probably won’t finish reading it right now, especially if you’re at work.
Yet another urgent text will come in, you’ll get a string of new email alerts, you’ll overhear a colleague at the next workstation mention your name during a videoconference so you’ll turn your attention to what that’s all about, you’ll still be trying to catch up on your emails when your boss will stop by to ask about that proposal you’ve been trying to finish all week, which will prompt you to go online to browse for some more information and then, since you’re online anyway and didn’t take a lunch break and starting to feel really resentful about the impossible amount of the work you’re expected to do and how hard it is to focus, you’ll stop off at Facebook and notice that today is the birthday of your best friend from college, so you’ll read the 73 messages she’s received so far and then decide, what the heck, you’ll give her a call while you’re still catching up on email and then, before you know it, you’re almost late for your third meeting of the day and feeling more stressed than ever, so you’ll get a large black coffee with an extra shot of espresso and try to work on the proposal during the meeting. 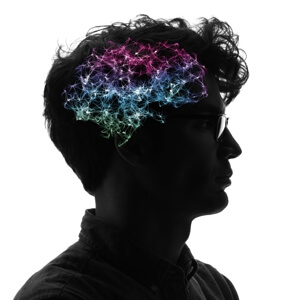 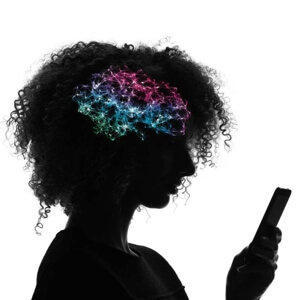 With attention meltdowns now epidemic in many organizations, nearly everyone is struggling to adapt, often without any real understanding of what attention is, how it works, or how to attain it and use it productively. Fortunately and just in time, the research of neuroscientists in more than 40,000 labs throughout the world is shedding new light on the processes of attention and, in so doing, providing decipherable clues into how it can be supported in the workplace. Thanks to the vast amount of research being done, it’s now becoming clear that solving many of the challenges that people face at work is linked to getting smarter about that three-pound organ that we all carry around in our heads. During the past year, Steelcase researchers and designers have been delving into the findings of neuroscientists and cognitive researchers, integrating discoveries from these experts with their own ongoing investigations into workers’ behaviors and the changing nature of work. The resulting convergence of findings has inspired new perspectives and new ideas for how environments, when thoughtfully designed, can be a hardworking and effective tool to help workers better manage their attention. And that has all kinds of competitive advantages: improved worker engagement and wellbeing, more creativity and innovation, and better business results overall.
“As demands on people’s attention grow, it is becoming more and more important to optimize our cognitive resources,” says Donna Flynn, vice president of the WorkSpace Futures team. “By studying the findings of neuroscientists, we’re realizing that knowing more about how our brains shape our physical, cognitive and emotional wellbeing is bringing more clarity to understanding human needs in the workplace. We’re learning what we can do with all this new science to help people think better at work.” 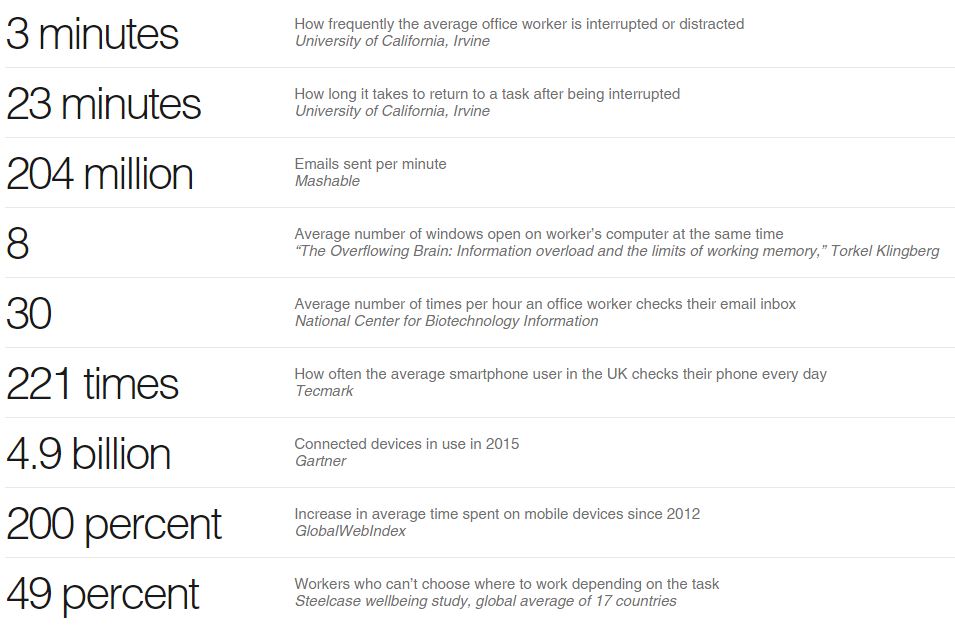 ATTENTION: THIS IS YOUR BRAIN Dictionaries give simple definitions for attention; in general terms, it’s about holding something in your mind. But cognitive researchers have a much more nuanced understanding, classifying different types of attention based on which areas of the brain are involved. For example, as a professor in Sweden’s esteemed Cognitive Neuroscience Karolinska Institute, Torkel Klingberg, M.D., Ph.D., delineated two distinct types: controlled attention and stimulus-driven attention. The former is about intentionally directing our attention; the latter is about things that attract it. It’s now known that there are multiple biological mechanisms involved in attention. The prefrontal cortex, often described as the executive center or the CEO of the brain, is the director of our attention. It’s the last major region to develop in our evolutionary history, and it’s what enables us to selectively focus on something. But neuroscientists tell us there’s more to attention than just this one part of our brains.
UNDERSTANDING ATTENTION: “To understand attention, we need to think of it holistically in terms of multiple brain functions, but also contextual issues such as the content our brains are processing, our physical state and the environment,” explains Beatriz Arantes, a WorkSpace Futures researcher and organizational psychologist. Our psychological state of arousal—in other words, how alert we are—is a significant factor because as it fluctuates, our attention fluctuates. When we’re tired and lethargic, it’s difficult to control our attention. When we’re highly excited, our minds also jump from one thing to another. Sustaining our attention depends upon a moderate, “sweet spot” level of arousal. Another key brain system affecting attention and arousal is the limbic system: dispersed parts of the brain that manage emotion. More primal than the prefrontal cortex, the limbic system prompts us to pay attention to stimuli that elicit fear or excitement. John Medina, a developmental molecular biologist at Washington State University with research interests in human brain development, writes, “We don’t pay attention to boring things.” In other words, human brains respond naturally to the unexpected, which makes us easily distractible. Evolutionarily speaking, being attuned to changes in our environment has been important to survival, and we still retain those natural tendencies to notice sounds, movements and stimuli around us. 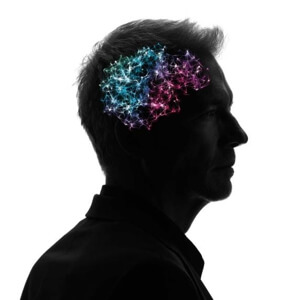 Scientists have proven that when we think we’re multitasking, we’re really switching our attention rapidly between things.
Of course, not all distractions are external. We’re also distracted by internal thoughts and concerns. Neuroscientists at MIT Trey Hedden and John Gabrieli found that internally generated lapses in attention are activated by the medial prefrontal cortex, a specific part of the prefrontal cortex that’s triggered by thoughts of ourselves or other people. The medial prefrontal cortex is part of the brain’s default network, our naturally occurring state of mind when we’re not focused elsewhere. Attention is also a function of motor orientation— how close we are to sensory stimuli affects how closely we pay attention to them. Students who sit close to the teacher have an easier time paying attention that those who sit far away, people having a conversation tend to lean in instinctively and fix their eyes on the person who is talking—even when that results in staring at a speakerphone throughout a conference call.
HOW BRAINS WORK AT WORK Most people still regard neuroscience research as a pathway to eventual cures for mental illnesses and disorders such as Alzheimer’s, unaware of the possibility of any immediate impact on their everyday lives, according to a report in the journal Science Communication. In reality, however, just as medical research into pathologies has produced a wealth of findings for improving our physical health, neuroscience research is producing findings that have relevance for improving our everyday cognitive functioning. In particular, Steelcase researchers have targeted three key findings from neuroscience that have important implications for how we perform at work.
BRAINS GET TIRED. It’s common to see organizations operating on the assumption that focus is the pathway to productivity and the goal, therefore, is to keep people as focused as possible for at least eight hours a day—the more, the better. Neuroscientists, however, tell us that focus is a limited resource. Like the rest of our bodies, our brains consume energy, drawing on glucose and oxygen as fuel. Controlled attention, in particular, is very hard work, drawing heavily on the prefrontal cortex. Activities such as analyzing, prioritizing, planning and other types of critical thinking are energy guzzlers. As energy supplies dwindle, brains get tired. Because our brains consume so much energy, humans developed physiological mechanisms over time to ensure that we wouldn’t waste our finite supply. That’s why, as the prefrontal cortex becomes taxed with a difficult or irrelevant task, we’re more likely to become distracted. It’s a simple energy-saving mechanism, like turning down a thermostat. “Our brains work in cycles of peak activity and downtime, moving between rhythms of energy expenditure and regeneration,” says Arantes.
“Our brains and bodies are designed to move through these rhythms, to stay alert so we can respond to other important environmental cues.” Problems arise if we try to stay focused when our brains are tired. Distractions abound, and we end up avoiding difficult tasks, learning little, remembering less and making mistakes. As stress mounts, the emotionally driven “fight or flight” syndrome kicks in, flooding the nervous system with cortisol and adrenaline. In the resulting state of over-arousal, instead of doing productive work, people who are stressed become consumed by irritation, guilt, pessimism and other unproductive states of mind. Noted psychiatrist and author Edward M. Hallowell has identified a neurological phenomenon he terms “attention deficit trait.” He says it’s a direct result of what’s happening to people’s brains in today’s hyperkinetic environment. “Never in history has the human brain been asked to track so many data points,” he says, concluding that this overloading of the brain’s circuits is the primary reason that smart people are underperforming at work. We’re simply expecting more of our brains than they have the energy to handle. “It’s as if the brain is on a budget. If it devotes 70 percent here, then it can only devote 30 percent there,” reports Sergei Gepshtein, a computational neuroscientist at the Salk Institute for Biological Studies who researches how the brain processes visual stimuli. 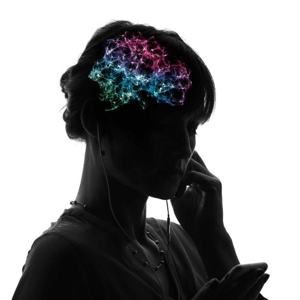 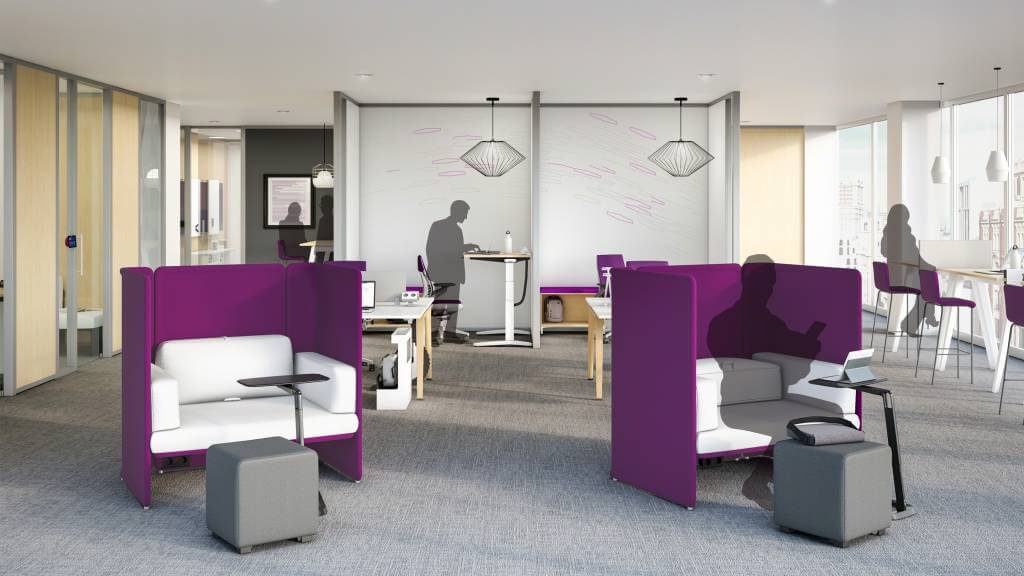 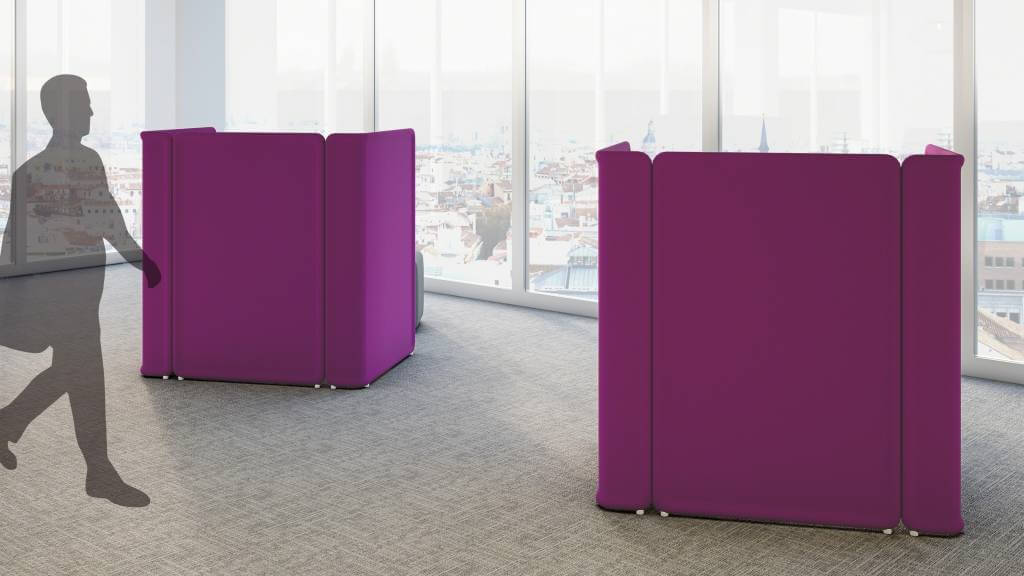 The Lagunitas settings support views to the outside and shield distractions. The cocoon-like setting, cuts down on visual distractions and provides an empowering sense of control and psychological safety. 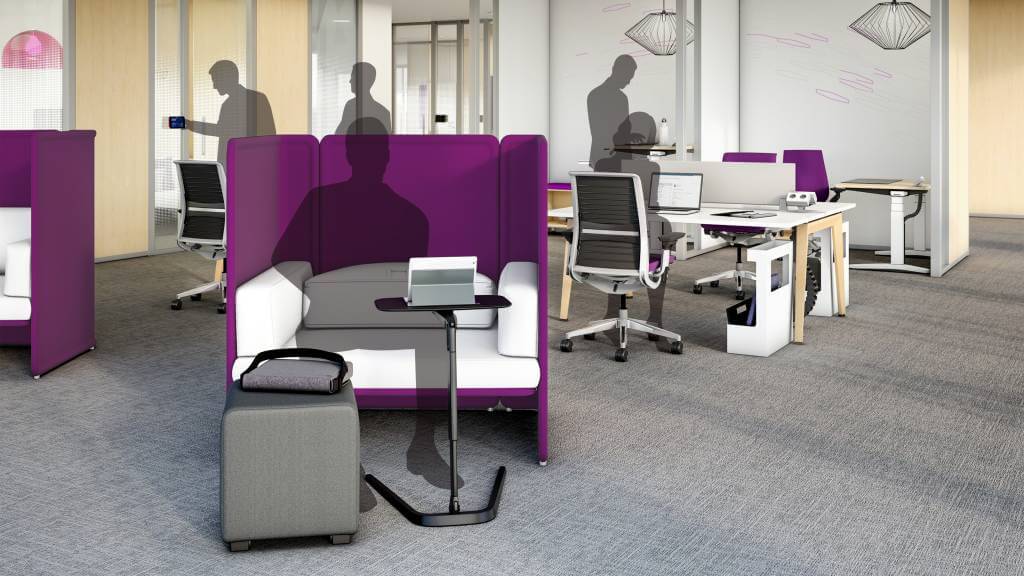 The workbench provides boundaries between individuals to allow for focused work. 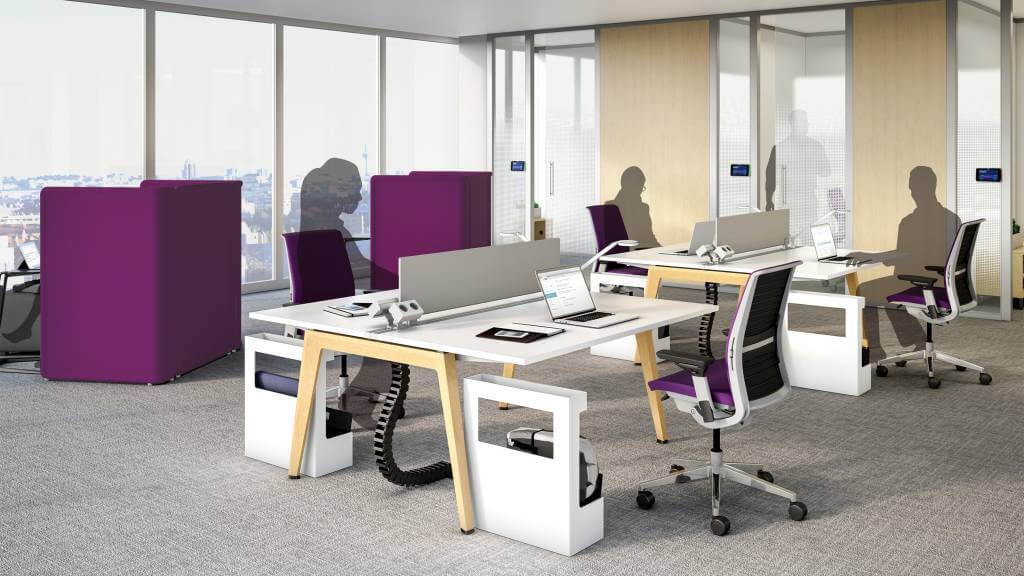 REGENERATION AND INSPIRATION Easy access to colleagues, nourishment and places to rest the mind helps cognitively-overwhelmed workers gain a new perspective. This social zone, placed at an intentional crossroad, hosts a variety of nurturing activities: grabbing a cup of coffee, taking a few minutes to be mindful, having a relaxed conversation with coworkers or simply taking a deep breath to recover brain energy. 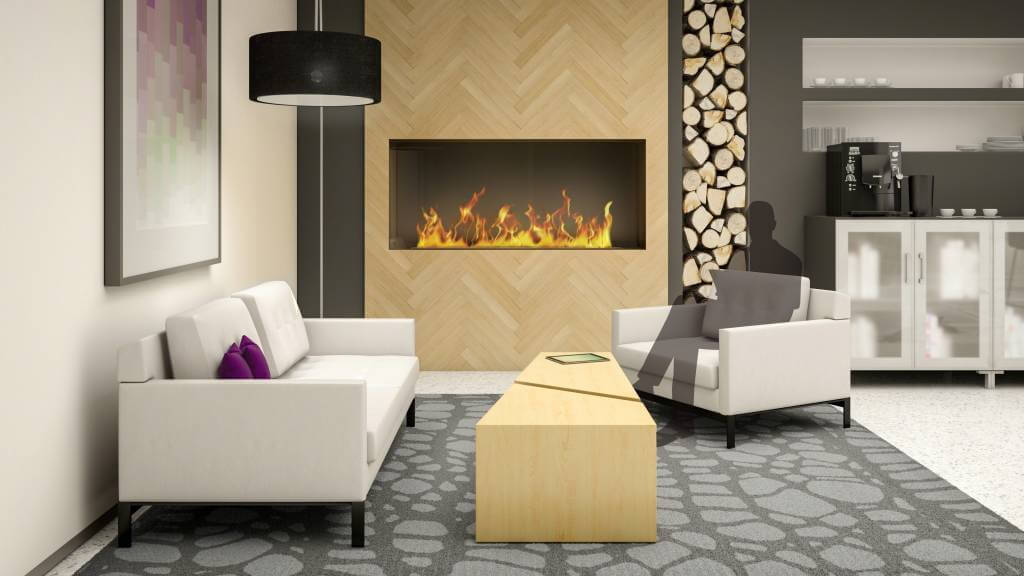 1. A fireplace surrounded by natural wood encourages calm contemplation and is also a hub for quiet conversation. 2. A coffee bar provokes serendipitous encounters and conversations, while a media wall invigorates the mind with interesting company information and news from around the world. 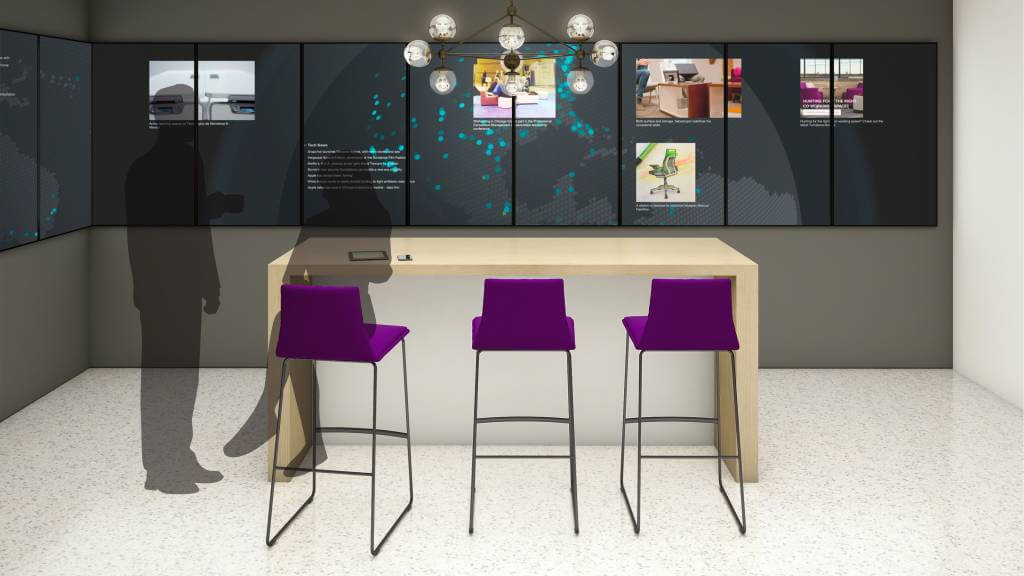 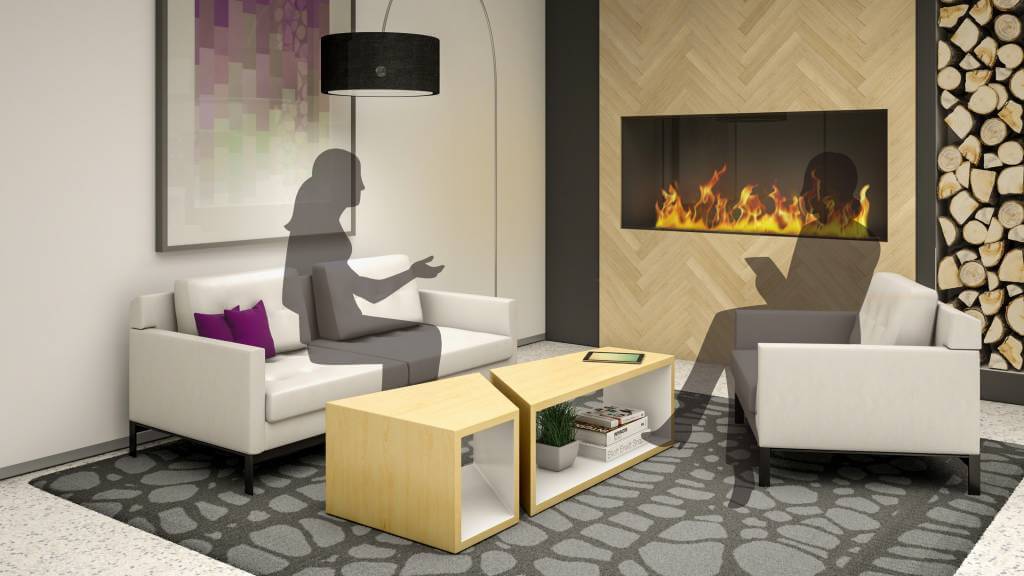 ACTIVATION Physical activity has proven to stimulate the brain. Provide easily accessible settings that encourage workers to move throughout the workday to activate their minds and also take care of their bodies. These settings incorporate opportunities for movement – whether a stand-up brainstorm session or the possibility to adjust the workstation to work in a standing posture for a while. 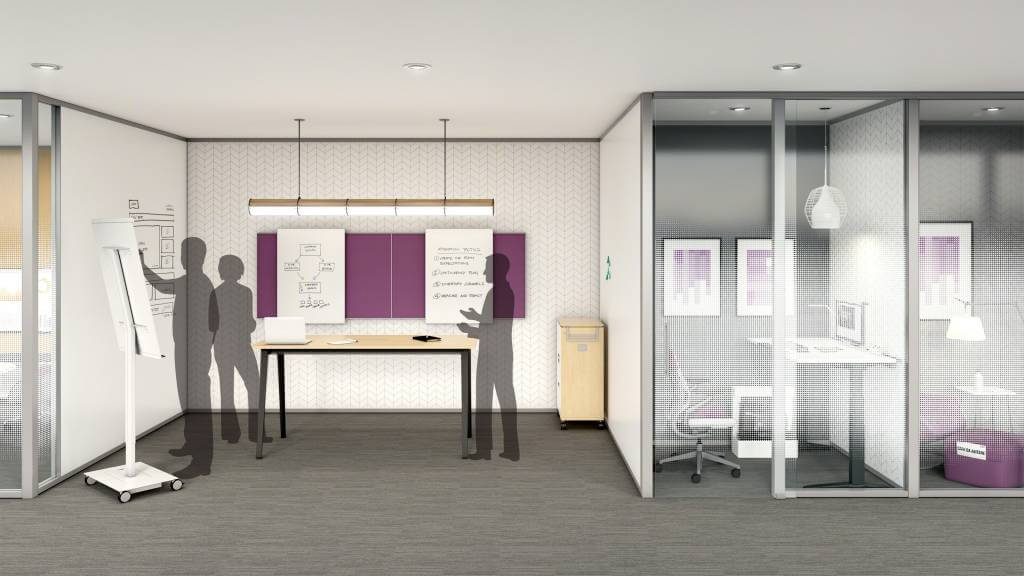 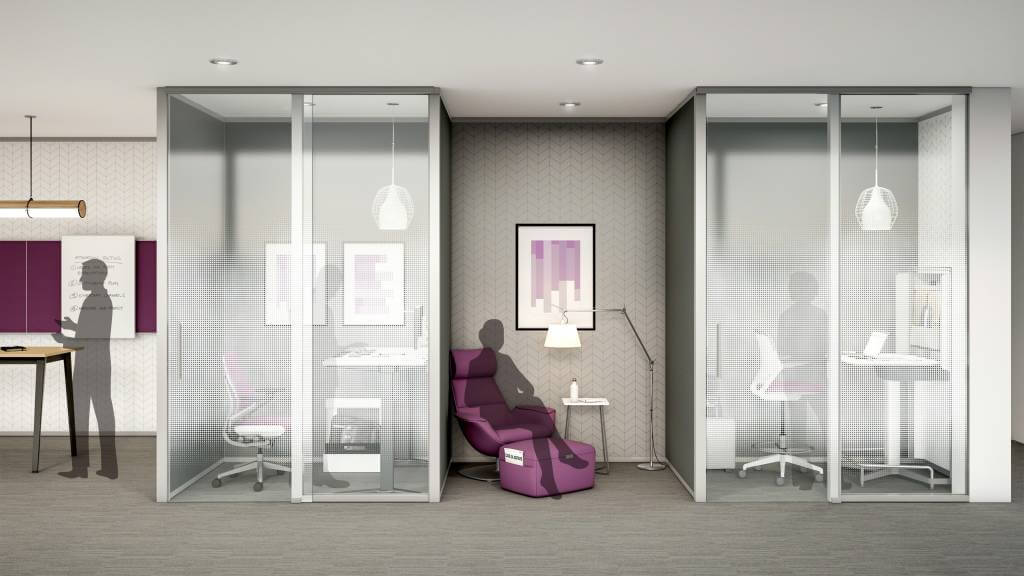 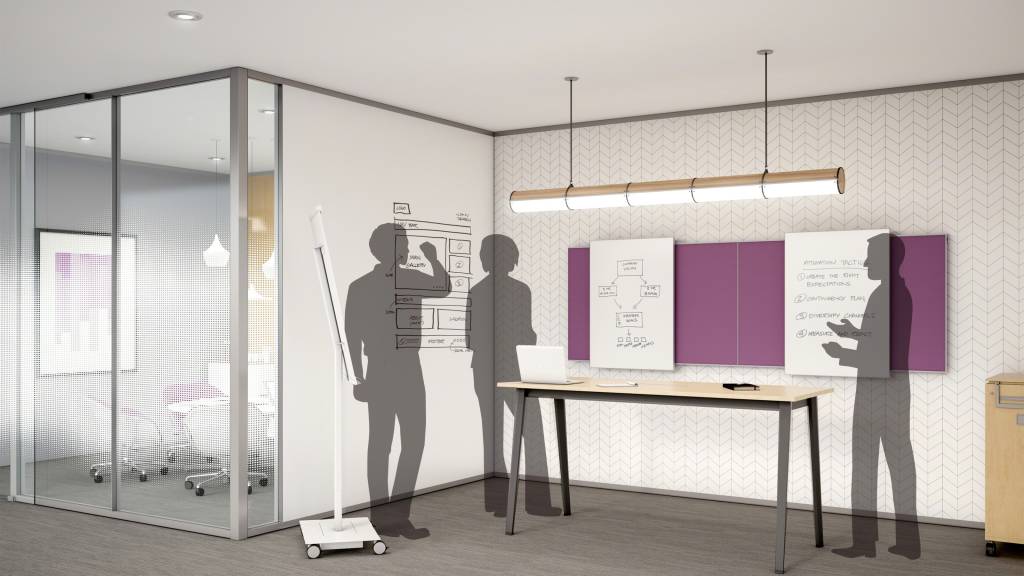